Over 100 menstrual cycle and fertility apps have hit the market and their popularity is growing.  In 2018, the U.S. FDA approved the first app (Natural Cycles) as an official “digital” method of contraception.   There is no doubt that the use of apps increases awareness about the importance of the menstrual cycle, but alongside the enthusiasm and the desire of users to know their bodies and be in control of their fertility, there is much misinformation about what apps can do and how they actually work.  Before deciding if or what app to use, a number of issues should be clarified so consumers understand the tool.

Basic facts about the menstrual cycle 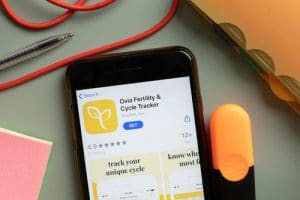 Apps can be divided into categories that define their features:

So now we know the difference between “period trackers” and  “fertility predictors.”

Next we want to delve into the facts about apps and devices that every person should know:

Most apps are not intended to be used as contraception as they cannot accurately identify your fertile window.  Most apps which “predict” fertile and infertile days are a kind of “hi-tech” version of the antiquated “rhythm method” because they estimate your current fertile days based on previous cycle lengths and/or they use BBT variations to identify that ovulation already happened.

Many health situations can reduce the accuracy of the app or device you are using:  hormonal disorders such as polycystic ovaries (PCO/S), stress, unexplained bleeding or staining, cycles during breastfeeding, cycles after miscarriages (natural and induced), cycles after coming off hormonal medications, changes in routine, and situations mentioned earlier like inadequate or irregular sleep and nutritional deficiencies. Algorithms cannot recognize or compensate for these situations.  Predictive apps and devices can be risky.  In other words, apps and devices cannot be completely trusted, particularly when there is a history of irregular cycles and/or disruptions in everyday life.

During the designated “unsafe” (potentially fertile) days, if a couple wants to engage in sexual intimacy they need to decide about what contraception to use. Either they avoid penetration and ejaculation (and enjoy non-penetrative pleasure) or have intercourse using other methods (e.g. condoms, withdrawal (pull-out), spermicides, diaphragm, or sponge). When used alone, these methods are typically only 75–90% effective.  A couple that wants sexual freedom on “unsafe” days (which is close to two weeks with the calculating apps and devices) and high efficacy – really need to use two methods of contraception, simultaneously.  If you only use a condom on a (potentially) fertile day and it breaks or isn’t removed properly, the result can be “100% pregnant.”  In other words, without two simultaneous methods used during “unsafe days,” a 10-25% risk of pregnancy exists.

Most app and fertility device manufacturers do not advertise the research models and statistical methods used to determine efficacy.  The companies are not regulated nor are they obligated to report such information to their users. The statistical efficacy of most apps has not been scientifically verified or validated.  Aggressive marketing on social media does not allow for information exchange and critical thinking.  Some companies have been scrutinized in the media.  In May 2019, the owners of the “Daisy” fertility device were struck an unfortunate blow, when a medical journal, Reproductive Health,  retracted an article about Daysy’s efficacy when it was learned that the company’s research methods were flawed and misleading.  Despite this, the company still markets its device as being 99.4% effective.  The Natural Cycles app raised worries a few years ago when a high number of accidental pregnancies were reported in the press.   In other words, be careful and skeptical about trusting hi-tech fertility apps and gadgets because the industry does not practice transparency.

The app and device manufactures sell (yes, sell!) your personal data to outside commercial entities, like advertisers and social media.  The data you enter into your app is not private but shared.  You can check the privacy settings on your app to see whether there is an option to prevent data sharing.   In other words, your most intimate information may not be private.

While hi-tech apps and devices are designed to make our lives easier, more comfortable and worry-free, there is a price to pay for this convenience.  There is no net gain necessarily from blindly trusting and developing a dependence on an external device or app which requires no analytic intervention on the user’s part.   Being dependent on a gadget doesn’t necessarily promote agency, confidence or a positive connection to the body.  There is no good substitute for having the personal knowledge needed to identify your own signs of fertility.   In other words, trusting a device is not the same as trusting yourself.

When women are looking for “easier solutions” they can fall victim to the commercial manufacturers who succeed in convincing them that anything in a hi-tech, expensive package is the most advanced, reliable, smart, effective and worthwhile product.  A paper from 2019 reviewed 18 studies from 13 countries and concluded that there is a “lack of critical debate and engagement in development, evaluation, usage and regulation of apps in addition to a paucity of evidence-based research.”    In other words, using an app or a device as an easy “shortcut” could cost you dearly.

Advertised statistics (like 99.4%) relate to theory and perfect use rather than actual effectiveness or imperfect use in the real world.  Accidental pregnancies occur with nearly all methods, including hormonal methods and even intrauterine devices (IUD’s). Sometimes it’s the method that fails but in most cases it’s the user/s that fail because they have not adhered to the rules in a correct and consistent way, or they do not fully understand how the method works. Apps and fertility devices, like all methods, can fail.  In other words, there is no free lunch; there is no 100% effectiveness of any method (except abstinence).

Most apps are not “methods” of contraception.  In order to “apply” the data on your app as a method, one needs to learn about their cycles, their hormones, and how they affect fertility signs and patterns. They also need to learn method rules.  If you are interested in a natural, fertility awareness-based method, it is highly recommended to seek out a certified instructor and properly learn a sympto-thermal method, like FAM. There are no shortcuts to acquiring this knowledge and skill.  In other words, for those wanting hi-tech contraception, an app that stores cycle data is not a substitute for learning a true and scientific method of birth control.

Before downloading an app or buying a fertility device, learn how the app or device actually works, and make sure the app is designed to meet your personal needs.  Be cautious about the advertised effectiveness rates and learn what they mean. Don’t be afraid to contact the manufacturers or customer service reps to get answers to your questions.  Speak to others and learn about their experience, especially if there is a monetary outlay involved.

In the post-Covid-19 era, the world of hi-tech and digital health is racing to make our lives easier, but let’s not forget that there is an even longer race to reap profits from the “fertility industry” marketplace that is investing tens of billions of dollars in developing new “fem-tech” products for women’s health and fertility. We are surrounded by ads and testimonials, especially on social media, and this requires smart consumerism and discernment for understanding what these products offer. Similar to ovulation predictor kits (OPKs), pregnancy tests, Plan B or Postinor, you want to know the pros and cons of using such products – before blindly spending money on them. As consumers we need reliable, unbiased information to make smart decisions.

Knowledge is power. When we adopt “healthy skepticism” towards advertisers trying to sell “us easy solutions,” there’s a better chance we won’t get “taken for a ride.”  We do not want sophisticated packaging and high-tech looks to mislead us.  Manufacturers want us to believe that all hi-tech innovation is a clear sign of linear progress, freedom, accuracy, reliability and efficacy. This is not always true.  We want to develop critical thinking about any product that seems essential to us. Know the pluses and minuses before you decide. When it comes to fertility apps, there is something dangerous about abandoning hormones and developing an unwavering belief that hi-tech apps will lead us to salvation; apps are not an equivalent alternative to other methods which have been studied and tested.

The Fertility Awareness Method (FAM) can be a good alternative for those seeking a natural, safe and effective method of managing their fertility and who want control over their body, health and quality of life -without unpleasant or disabling side effects.  FAM isn’t for everyone.  FAM is based on monitoring and charting 2-3 signs of fertility each day- basal temperature, natural secretions and changes in the cervix. Unlike most apps and fertility devices, FAM is not a calculation or predictor method but rather an observational method, based on monitoring one’s fertility signs, in the present.  It takes two minutes a day. Once you learn the method and the method rules and have at least 4 normal cycles charted, it is entirely possible to move to a good app as a short-cut, which enables the charting of these signs.  The choice is yours.